Noting that this year marks the 65th anniversary of the diplomatic relations between India and Poland, the Deputy Foreign Minister of Poland, H. E. Marcin Przydacz has said that India Poland trade has been growing but has potential. He hoped that it can be doubled in the next few years.

Recalling the deep emotional ties between the two nations due to India having provided refuge for Poles during the World War II, the Deputy FM called for enhancing both cultural and business ties and invited Indian business leaders to Poland.

He said this in a press conference held after the India Poland Business Meeting, organised in Kolhapur on September 14, on the occasion of commemoration of 80th anniversary of Poles in India.

He said that business leaders of both countries are excited to forge collaborations and take the bilateral relationship to greater heights; thanking the state government for its support, he added that the idea of the bilateral Business Meeting arose from the hope that the emotional connect gets bolstered by adding business.

Ambassador of India in Poland, Adam Burakowski exhorted Indian industry to invest in Poland, stating that Poland continues to be the biggest trade partner of India, in the European Union. He said that Poland is the sixth biggest country of EU, and that its GDP growth almost matches that of India.

He said that Poland has very good international connectivity as well. Citing a survey done by a Polish investment agency, the Ambassador said that investing in Poland has been found to bring a high level of satisfaction to investors.

CEO, LOT Polish Airlines, said that resuming of a direct flight between Warsaw and New Delhi after 25 years is a momentous development. Pressing on the need to better connect the two countries, he said that there should be at least one daily flight between Mumbai and Warsaw.

Lauding the Indian entrepreneurial spirit and appetite for success, the CEO highlighted scope for business collaboration between the two countries in the areas of Information Technology, Artificial Intelligence, textile, leather and silver industries.

Referring to the discussion, Bhushan Gagrani, Principal Secretary to the Chief Minister of Maharashtra said that the state government supports the idea of starting a direct flight between Warsaw and Mumbai or Pune. He said that Kolhapur holds immense opportunities in the area of foundry, leather and small scale industries, and exhorted Polish businesses to tap into this potential.

Switzerland-India partnership is a special one: President Kovind

Sat Sep 14 , 2019
Switzerland-India partnership is a special one. Economic engagement along with innovation and science and technology has been its key drivers. 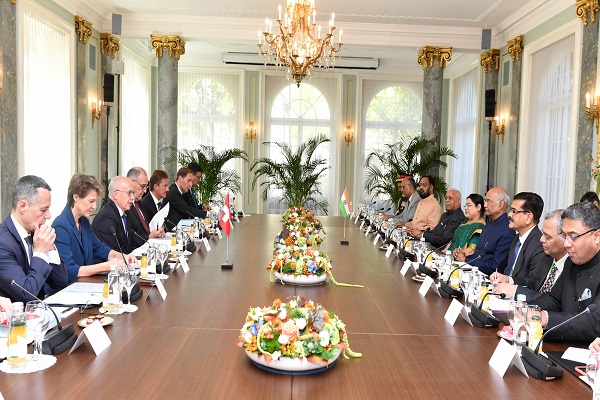