Vice President of India, M Venkaiah Naidu urged all stakeholders of the tourism industry to be especially mindful of their ecological foot print and called for more responsible and sustainable tourism practices.

Vice President of India, M Venkaiah Naidu urged all stakeholders of the tourism industry to be especially mindful of their ecological foot print and called for more responsible and sustainable tourism practices.

Expressing his concern over the problem of pollution, he asked service providers to make sustainability and conservation an integral part of their business plans.

“Adopt a more judicious approach to consumption of resources so that future generations also have the opportunity to avail of all the benefits of tourism,” he said.

He stressed that there is a need to keep in mind the aspect of ‘ethics’ in travel and added that tourism should benefit people and the environment in different destinations.

“It should offer better income to families living in the area, by sourcing products and services locally. It should serve as a tool for the empowerment of local communities,” he opined.

The Vice President also met with Sofia Montiel De Afara, Minister of Tourism of Paraguay on the sidelines of the event and held discussions about India-Paraguay cooperation in the field of tourism.

Naidu advised De Afara to also look into easing of visa regulations to facilitate travel of citizens for tourism, business, trade and commerce and called for promoting people-to-people contacts between the two countries.

The Vice President also met with the Zurab Pololikashvili, Secretary-General of UNWTO.

The Vice President said that World Tourism Day was celebrated every year to create awareness on the social, cultural and economic values of tourism and to encourage global communities to travel, experience and learn to respect the diverse cultures of the world.

Observing that tourism is a major engine of economic growth and an important source of employment and foreign exchange earnings in many countries, Naidu said that tourism in India has tremendous potential, considering the country’s rich cultural and historical heritage, varied ecology, terrains and places of natural beauty spread across the country.

The Vice President expressed his happiness at the fact that, in both developed and less developed economies, travel and tourism employed a far higher proportion of women than other sectors.

He urged more women to explore career opportunities in the tourism sector.

Noting that India had been placed at 34th position out of 140 economies, in the World Economic Forum’s ‘World Travel and Tourism Competitiveness Rank’ in 2019, the Vice President said that it remained the sub-region’s most competitive travel and tourism economy.

Outlining the steps taken by the government to make the country accessible and safe to travelers, Naidu applauded the liberalised visa regime and said that it would certainly stimulate business and investment, along with tourism.

Observing that Budget 2019 envisioned the development of 17 iconic tourist sites as world class tourist centres to improve the flow of domestic and foreign tourists, the Vice President called for augmenting and upgrading tourism infrastructure and urged the corporate sector to supplement the efforts of the governments in this regard.

The Vice President asked people, especially the youth to visit at least 15 tourist destinations within India by 2022 to give boost to domestic tourism, as per the suggestion made by Prime Minister Narendra Modi.

Naidu urged students to undertake ‘Bharat Darshan’ to learn about various facets of India’s culture, heritage, languages and cuisine and enhance their understanding of the unique cultural mosaic of the country.

“This understanding would help them devise ingenuous and effective solutions to the challenges faced by the country today,” he said.

He advised tourism service providers to continuously strive for service excellence, and to make conservation and sustainability an integral part of their business model.

The Vice President also underscored India’s tremendous potential in the field of medical tourism and said that India must leverage its ancient practices of healing such as Ayurveda and Yoga to attract more tourists who seek holistic wellness.

PM Modi has given a strong message to Pakistan Said Trump

Tue Oct 29 , 2019
President Trump says PM Modi has given a loud and clear message to Pakistan; also says there will be an Indo-US trade deal very soon. 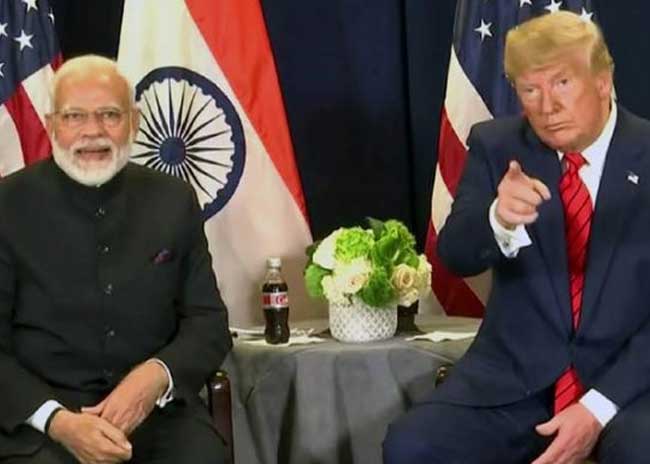